Snow, work and a brace of Pheasants 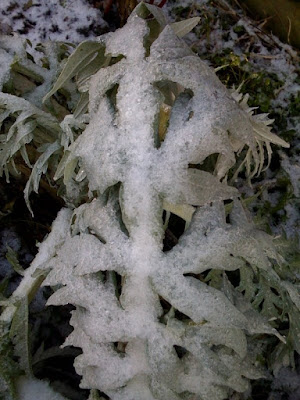 Well woke up this morning (06.30 !!) full of joy and happiness to be back at work only to be greeted by a car covered in snow. Once I had taken Sharron to the station and made a coffee I logged in to my work pc to find 401 unread emails, this whist listening to radio 4 telling me this is the most stressful day of the year.

Over the New Year the farmers around here organise Pheasant shoots. Now I do not really approve of shooting but I do understand that it subsidises their income, also the Pheasants are bred and released for shooting. What I hate is to think of the birds being shot and not used as happens on some shoots at least around here the birds are distributed around people in the village. On the 2nd Sharron took Boris out for his afternoon walk across the fields where there had been a shoot earlier. All of a sudden he dived into the undergrowth and reappeared with an injured hen pheasant which he quickly (and very proudly) killed, much to Sharron's horror. She phoned me to come and get the bird away from Boris who did not want to give up his prize. By the time I got to them he had dropped it but Sharron had met some more dog walkers whose dog had done the same thing, so it was down to me to check both birds were dead. 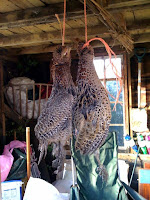 So what to do with 2 dead pheasants? Well as I said I hate to see them wasted, (although Sharron won't eat them) so I now have a brace hanging in the potting shed. I should add that I spoke to one of the organisers of the shoot who had in fact been out with her dog looking for any injured birds and explained what had happened.
Posted by Gary