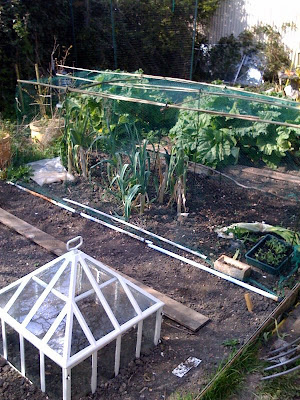 We had some rain overnight, the first for about 10 days, not a lot but enough to dampen the ground. It amazes me how fast the grass and other plants green up after a shower. The other thing I have noticed in the pastis how seeds will germinate after rain when they don't seem to after days of using a watering can or hose, has anyone else noiced this?

I spent an hour last evening constructing this cage to protect the Kale (Brassica oleraces Var acephela) that I have planted. I decided that this year I would be mean and not share my crops with the pigeons and the caterpillars as I have done for the last couple of years. One of the local farmers who shoots pigeons on his land was telling me that at this time of year they taste of cabbage when you cook them due to the amount of oil seed rape they eat.

On Sunday I drove over to Northamptonshire to visit the rare planr fair at Evenley Wood gardens. It was really good but a lot smaller than the ones I used to go to in London. The setting was a lot nicer than the hall in Clapham were I used to go, the stalls where laid out in woodland and surrounded by magnolias in flower.

I bought a few things including Prostanthera rotundifolia the Australian Mint bush, the scent of which is amazing, Ancathunus mollis Hollands gold which has golden yellow leaves not the usual dark green. I also got a ebony leaved Angelica and a lovely poppy called Papaver 'Louve'.
Posted by Gary