Well according to the hospital the most likely cause of my eye problems is stress. It is as I thought a macular oedema or as it is now known CSR which is commonly caused by stress. It is present in both eyes and there is no treatment except time, even then it will leave some permanent damage. So my aim now is to try and de stress. The problem is that my job requires me to sit in front of a computer screen all day and when half that screen is out of focus it doesn't make for a stress free environment!!

Anyway the best way I know of reducing stress is to garden ( discounting slugs, ground elder, cabbage white butterfly, root fly etc etc) and the weather over the last week has meant I have been able to get lots done.

The first thing I want to so you is my Garlic, these were grown from bulbs brought back form the garlic farm on the Isle of Wright by Sharron's parents. 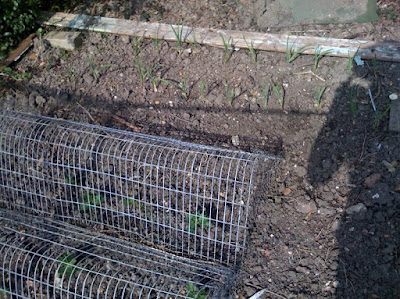 The lawn has now had 2 cuts yhis year and will need another one by this weekend unheard of for March normally it would still be to wet to walk on. The flower bed is about 10m wide and about 6m deep to give you an idea of scale. 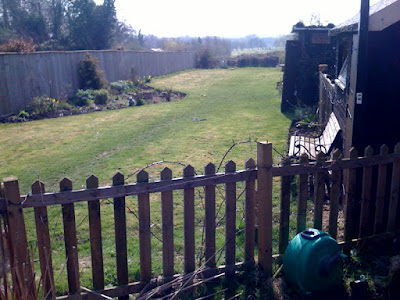 A lot of the work I have been doing has been preparing the veg patch As you can see I still have a few leeks to harvest. I have now got all my early potatoes in. I have also sown peas, parsnips, shallots, salad leaves , lettuce, radish. In the greenhouse I have got Celeriac, leeks, kale, and beetroot all starting in modules. I am growing carrots in pots again this as this works really well, 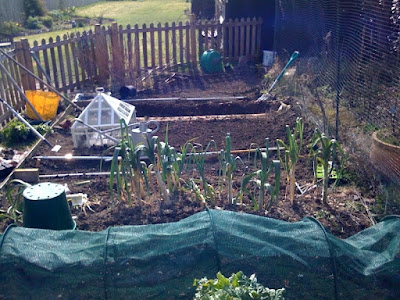 I have also been planting out a lot of perenials but I will tell you about them another time.
Posted by Gary