Time to fess up

I alluded to the fact in my first update that the garden was in a bit of a mess and that this was mainly down to the weather, well if I am honest that isn't strictly true. I had big plans for the garden this year ; I wanted it to look really good for my birthday party in July. Unfortunately it got away from me, the large flowerbeds I have created were impossible to keep weed free. I think this was partly due to the fact that the perennials I have been planting haven't got established well enough to provide ground cover along with the really good growing conditions early in the year. The same was true in the veg patch and the herb garden, as fast as I cleared them they returned. Then I managed to miss a couple of weeks weeding duty and chaos ruled. Those of you you who have been following this blog for a while will know that I do suffer from bouts of depression and I think I went into one about this time and gave up. 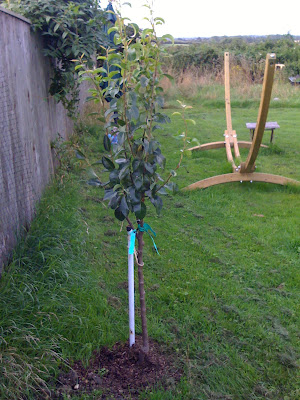 I did manage to get it looking reasonable by July but after the party I gave up on it again. The thing that has made me want to get going again was when a Pear Tree arrived in the post, this was a birthday present from some friends and was a total surprise. Having a tree to plant meant that I had to plan the future of the garden as trees are long term things. So I have now decided on what I am going to do. I am going to get some more perennials for the beds in the autumn and plug the gaps. The veg patch and the herb garden are going to be re dug and the soil refreshed to try and break down the heavy clay a bit. I am also going to do some work on the garden studio as I feel if I spend more time in the garden it will help me.

I am actually sitting in the garden as I type this having a coffee break. I have been securing the boundary hedges to prevent the dogs escaping. So at least I am getting some of my motivation back. I know I am going to be have a very hard autumn and winter trying to sort things out, but a bit of hard work never hurt anyone.
Posted by Gary