Laying concrete and a trip on the Cam.

I spent Saturday morning laying some concrete in the garden. I was re-enforcing the base of the Chicken coop to prevent vermin getting in. Several people in the village have told me that there are a lot of rats around at the moment, they come in from the fields and ditches during the hard weather. By replacing the wire mesh floor of the coop with concrete it just makes sure nothing can get in and gives the hens a nice dry floor to stand on.

Saturday was a strange day, when I went down to St Ives it was lovely sunshine, by the time I got back there was thick fog, it just went downhill from then just cold and grey.

The weather on Sunday was much the same, I had decided to go kayaking and wasn't going to let that put me off. I went to a place called Upware on the river Cam. Upware has an interesting history, in the 1850's it was the home of the Upware Republic formed by one of the Cambridge university clubs complete with it's one Parliament and money. This was replaced in the 1870's when Richard Fielder declared himself the King of Upware, he spent his time at the 'The five miles from anywhere in a hurry' Pub where he had a six-gallon beer jug known as 'His majesty's pint'.

Anyway I parked at The five miles from anywhere in a hurry pub where there is a public slipway into the river and went for an hour and a half paddle. 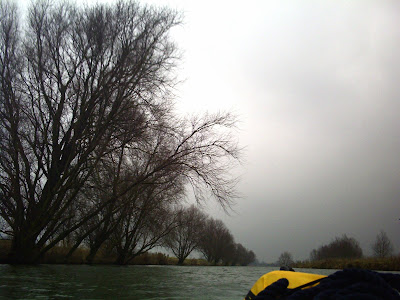 As you can see the river was running quite high and the weather was cold and grey. It was nice to get out on the river and unsuprisingly apart from a couple of fishermen I had the place to myself. 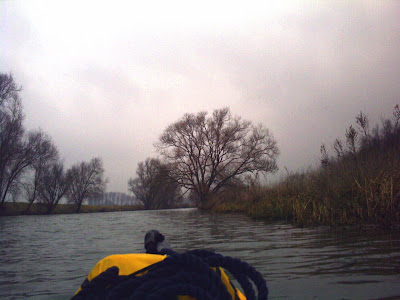 The weather actually got worse and after it started to rain I decided to give up, mainly because I had left my waterproof top at home, not very clever!

Later that afternoon we went to Ely with our neighbours for tea. We went to a little tearooms called Peacocks on the Waterside. It is a great place selling over 50 varieties of tea from all around the world and if you don't like the one you have ordered they will change it free of charge, well worth a visit.
Posted by Gary