The problem with colour blindness 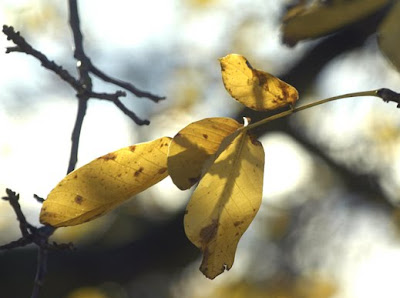 I took this shot yesterday morning between the showers, after all the storms of the last few days they are still a few leaves hanging on the walnut. We have had a lot of rain but nothing like they have had in the North. Most of the rivers around her, principally the Great Ouse will burst their banks in the next few days, but this is normal and infact essential as it supplys nutrients to the fields or levels as they are known, I will get some photo's this year to show you.

As regular readers will know we are in the long process of decorating the house, well the current project is the staircase. The last stage of was to be laying a new carpet. Last Tuesday was the day, Sharron was away in Leeds when the man arrived to lay the bit on the landing at the top of the stairs. I chatted to him as he lay it it looked really good, if a little lighter than I thought it would, but the light at the top of the stairs is not good. Anyway when Sharron got back, excited to see the progress, she took one look and told me it was the wrong carpet. In fact when we checked with the supplier it wasn't even made by the same manufacturer! I felt a total idiot but in my defence my memory for colour is hopeless as is my ability to match shades of greens, browns and reds. we have painted part of the staircase Olive (I know this as it say's so on the tin) depending on the lighting it is either green, muddy brown or dark grey. Anyway the carpet people were really nice and are going to replace it soon.

I am a tennis widower again this week, Sharron is working as an official at the ATP masters at the O2 in London. I always miss her when she is away but at least I only need to turn the TV on to see her.
Posted by Gary