Bloodsports in the veg patch 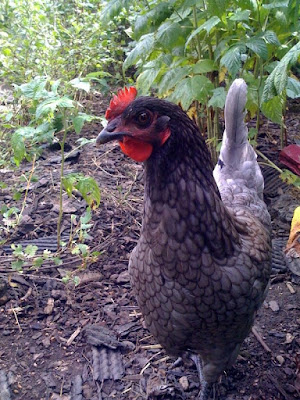 Now I don't really approve of bloodsports, I was the first in the queue to sign petitions to ban fox hunting, and still am against Bull fighting. I will hold my hand up and admit to being partial to a nice pheasant but wouldn't shoot it myself. Anyway I have discovered a new one and it involves Betty whose picture is here, Slug and Snail baiting. Yesterday as I was working in the fruit cage I moved the pots the Blueberries are growing in, underneath were a collection of large 2 inch long yellow slugs. Before I new it Betty and her mates dived in an they were gone. She is just as good with snails eating them shell and all, they reabsorb the calcium from the shell to use in the their own egg shells. Having seen how efficient they are I can forgive them for stripping all the gooseberries off the bushes. They also love it if I do some digging, they fight over who gets to the fresh soil first, I do have to be careful as they stick their heads between the tines of the fork in their eagerness. I am looking forward to their help in preparing the soil on the veg patch in the autumn, grubbing out lavae.
Posted by Gary