I have always been a firm believer in global warming and have seen lots of evidence to support it, earlier flowering, survival of tender plants, but I wasn't expecting to still be picking tomatoes from an unheated Cambridgeshire greenhouse in December! So far this year we have had one very light frost, both the Willow trees in the garden are still in leaf and the tulips are already coming up. 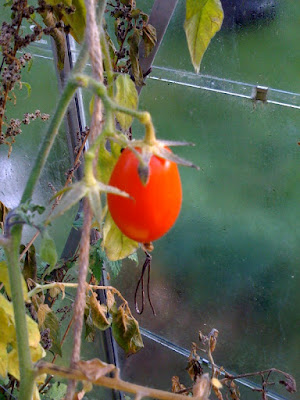 Also in the greenhouse are these sweetpeas I have started off for next year. I will let them grow on a bit before pinching them out. They will then either stay in the greenhouse over winter or get moved out to a coldframe. 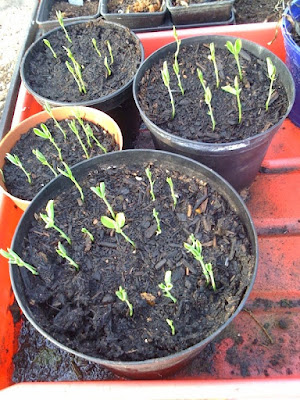 I went a bit mad buying bulbs for next summer. I bought about 80 alliums, which seemed a good idea at the time, then I had to find places to plant them all. I think next June the garden will be nothing but purple globes, oh well never mind!

Last night we had the last meeting of the 'Village in Bloom' group we have decided that it had run it's course as the amount of interest in the village has waned.. In it's place we have launched a new conservation based group called Natural Woodhurst. We intend to apply for some conservation grants to help fund some local projects as well as working with local volunteers. In fact we have already started some of the projects, we had a seed collection event with the aim of growing native species to repopulated some local hedgerows. We have also been working on projects in our village conservation area and with a couple of ponds in the village. So what of the 'In Bloom" competition? Well, we will still be maintaining the various planters and flowerbeds in the village and if we feel like entering the event we will, it just won't be the main priority anymore, in fact we may well be looking at other schemes that recognise our enviromental efforts more.
Posted by Gary