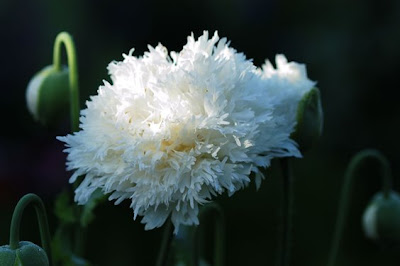 Well this is my first effort for 'Blooming Friday' obviously it was taken earlier in the year.

I took the dog for a walk across the fields and around the village this afternoon. After the rain and other winter weather of the last couple of weeks the fields was a bit like sticky brown porridge. Whilst I slid and tried to move my clay clad boots across this morass, Boris (the dog) was running around like an idiot, he loves it when it is like this, in fact he likes it so much he has to keep jumping up you to show his pleasure. Luckily today I managed to get him back on the lead before we got to the flooded ditches, a small victory for mankind over canine!

As I came back into the village I saw a friend working on one of his hedges. Alister is trying to cut back and remove some of the Elm and replace it with less vigorous species. I stopped to have a chat as the piece of land I am going to be working on for the Village in Bloom is at the end of his lawn. I want to make sure we don't do anything there without informing him first.
As we carried on around the village the school bus had just emptied its young passengers out. The kids all know Boris and came over to make a fuss of him, the kids in this village are really good, there is never any trouble here. One of them was telling me that he is going flying tomorrow from the local airfield and will be overflying the village(might go out tomorrow a long way away!) have told him to take some pictures and sell them to the locals, knowing Barney he probably will.
Posted by Gary