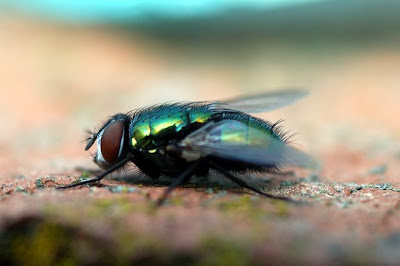 We have been suffering a plague of flies this year, I thought it was just around here but my brother who lives down on the South Coast says it's been bad down there. It is quite fun to watch Boris try and catch them as they land on him, the cats chase after them as well.

My neighbours tell me that this was a common problem in the village in the past. The village is a medieval ring village, which means that the houses were built in a ring around an open area. Until recently (thankful before we moved here) this area contained a pig farm. Apparently it was impossible to open your windows at times due to the flies!
Posted by Gary