A village in bloom day 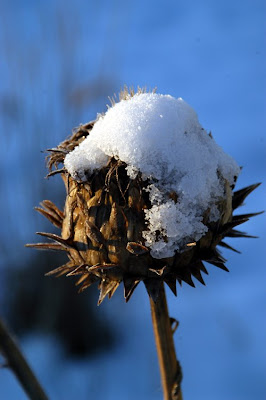 Cardoon
we woke on Saturday morning to a heavy frost on to of the remaining snow, it was -6.5 outside. We had an early start as Sharron had a Tennis course to go to in bedfordshire and she needed to leave by 8.

my plans for the day were centred around the Village in Bloom project, we had arranged to spend the morning clearing the conservation area and improving the wildlife habitat. We had agreed to meet on site at 10, when I got there peter was already there cutting back the blackthorn, Phil, Ruth and Annabel arrived soon after. We managed to clear the circular path around the site before we decided to retire to the church coffee morning Organised by Sally and Avril. Sally had arranged for a special cake to be made and raffled between the conservation workers it looked fantastic decorated with all sorts of bugs and things.

After coffee the 5 of us walked around the village to identify village trees suitable to be used in the nest box project we are running as part of in bloom. We identified at least 12 now it just down to negotiating with the people on whose land they are growing on.

I spent the rest of the day watching the cricket.... lest said about that the better!
Posted by Gary