So winter is finally upon us and a conundrum for you. 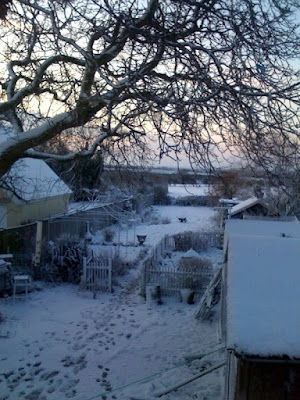 This is the view from the office this morning, not as bad as I had expected but it seems to be causing the usual chaos out there. Our christmas tree blew over twice yesterday, once I have sorted it out I will post some pictures of our Christmas efforts.

I have had an interesting week I went down to London for a work meeting. As most of you regular readers will have worked out I am a homeworker for a major company. This was the first time I had seen my boss on in fact anyone from my team since September 2008 yes 2008! The company has had a travel ban in place to save money which is OK but the effect has been to make workers like myself feel very isolated and vunerable.

My Christmas present from Sharron arrived whilst I was in London so the postman left it next door. I think Ron was a bit puzzled by a very thin light 2m long package, he found somewhere out of the rain to keep it dry which was quiet funny as it is designed to get very wet! What is it? I will tell you after Christmas as it would spoil the surprise , but it's not for use in the garden and it gets just as wet in the sun as the rain?

Q. Why did Frostie move to the mid Atlantic?

A. Becuase Snowman is an island.
Posted by Gary